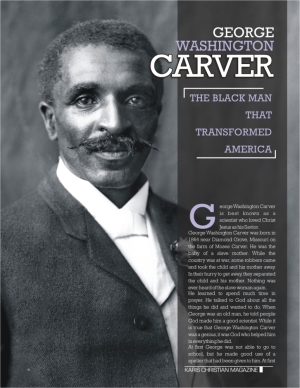 While the country was at war, some robbers came and took the child and his mother away. In their hurry to get away, they separated the child and his mother. Nothing was ever heard of the slave woman again.
He learned to spend much time in prayer. He talked to God about all the things he did and wanted to do. When George was an old man, he told people God made him a good scientist. While it is true that George Washington Carver was a genius, it was God who helped him in everything he did.

At first George was not able to go to school, but he made good use of a speller that had been given to him. At first he found it hard to learn. But George had made up his mind that he was going to learn to read and write, so he worked hard at his studies.
He earned his Bachelor of Science degree at Iowa State College in 1894 and a Master of Science degree in bacterial botany and agriculture in 1897. He was an Assistant Botanist and was in charge of the greenhouses at this same college while he worked on his master’s degree. This position was taken away from him because of his skin colour. As a result of this, he had more time to do research work.
In 1897, Booker T. Washington, founder of the Tuskegee Normal and Industrial Institute for Negroes, convinced Carver to come south and serve as the school's Director of Agriculture. Carver remained on the faculty until his death in 1943.
As an agricultural chemist, Carver discovered three hundred uses for peanuts and hundreds more uses for soybeans, pecans and sweet potatoes. Among the listed items that he suggested to southern farmers to help them economically were his recipes and improvements to/for: adhesives, axle grease, bleach, buttermilk, chili sauce, fuel briquettes, ink, instant coffee, linoleum, mayonnaise, meat tenderizer, metal polish, paper, plastic, pavement, shaving cream, shoe polish, synthetic rubber, talcum powder and wood stain. At Tuskegee Carver developed his crop rotation method, which revolutionized southern agriculture. He educated the farmers to alternate the soil-depleting cotton crops with soil-enriching crops such as; peanuts, peas, soybeans, sweet potato, and pecans. 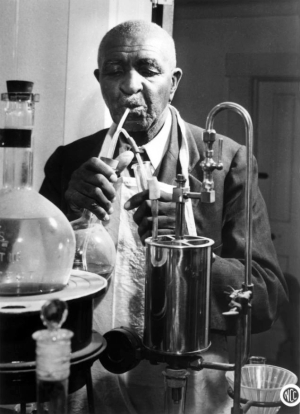 During World War I, he found a way to replace the textile dyes formerly imported from Europe. He produced dyes of 500 different shades and he was responsible for the invention in 1927 of a process for producing paints and stains from soybeans. For that he received three separate patents.

Carver did not patent or profit from most of his products. He freely gave his discoveries to mankind. "God gave alary of more than $100,000 a year (almost a million dollars today) to continue his research on behalf of his countrymen. In 1940, Carver donated his life savings to the establishment of the Carver Research Foundation at Tuskegee, for continuing research in agriculture.

them to me" he would say about his ideas, "How can I sell them to someone else?" Carver declined an invitation to work for a salary of more than $100,000 a year (almost a million dollars today) to continue his research on behalf of his countrymen. In 1940, Carver donated his life savings to the establishment of the Carver Research Foundation at Tuskegee, for continuing research in agriculture.
While other scientists looked into the microscope only to find that their work had been in vain, George Washington Carver, the black scientist spent much time in prayer. His faith and his prayer, rather than his microscope, made him such a success. For each problem and each discovery, Mr. Carver spent much time praying to the Lord and waiting on Him for results. This man who loved God so much turned many weeds into food and made waste places into gardens. His help to people has never been forgotten. Friends and other great men of the world came to visit George Washington Carver in his small laboratory. Whenever they came, Mr. Carver would explain to them the scriptures and give his own testimony of his love for the Lord. George Carver especially liked to read about the Lord Jesus and His parables. His well worn Bible proved to everyone that he spent much time reading God’s word.