When young people enlist in the Marines, Their first stop is boot camp. There they receive intensive, basic training geared to carry them across the threshold from civilian to military life. The major purpose of boot camp is to develop the character that will sustain a Marine in the crisis situations of battle. This is partially done through gruelling physical disciplines designed to build both muscle and stamina. But even more important are the psychological conditionings necessary to ensure that every Marine believes in the mission of the Marine Corps, develops courage and self-discipline, and is fully prepared to submit to authority and obey commands with no questions asked.

Without the basic training of boot camp, Marines would never win a battle, much less a war.

Basic training applies equally to Christians who desire to do spiritual warfare. Too many Christians want to get involved in the action without first submitting themselves to the discipline necessary to equip a warrior for battle. To the degree that they do, they leave themselves open to serious personal attack and they run the risk of bringing discredit to the Body of Christ.

Spiritual warfare should be seen as involving two simultaneous movements: the upward and the outward. Some call it the Godward and the Satanward. In a book that has become a Christian classic, Quiet Talks on Prayer, S.D. Gordon, at around the turn of the last century, pointed out that “prayer concerns three.” It first concerns God to whom we pray, then the person doing the praying, but also the evil one against whom we pray. “The purpose of prayer,” says Gordon, “is not to persuade or influence God, but to join forces with him against the enemy.” Joining with God against Satan is essential in prayer. “The real pitch is not Godward, but Satanward,” Gordon says

Although our goal in spiritual warfare is to join God in defeating the enemy, we must never forget that we, in ourselves, have no power to defeat him. “Not by might nor by power, but by My Spirit, says the Lord of hosts” (Zech 4:6). The principle here is that it is extremely dangerous to attempt to move too far outward without first moving far enough upward. Moving upward is the spiritual boot camp, while moving outward is the battle. Just as in the Marines, the battle cannot be won without first going through boot camp.

I find it helpful to conceptualize what I am saying by using a simple diagram; I have arbitrarily numbered the upward and outward scales from 1 to 10. Although these numbers are very subjective, the best advice I can give in spiritual warfare is at all times to make sure you are scoring higher on the upward scale than on the outward scale.

This chapter is about the upward side of the diagram, our personal, spiritual basic training. The rest of the book will describe in some detail our battle plan and what it means to move Satan ward. But the sequence cannot be changed. We must look at the Godward side first. 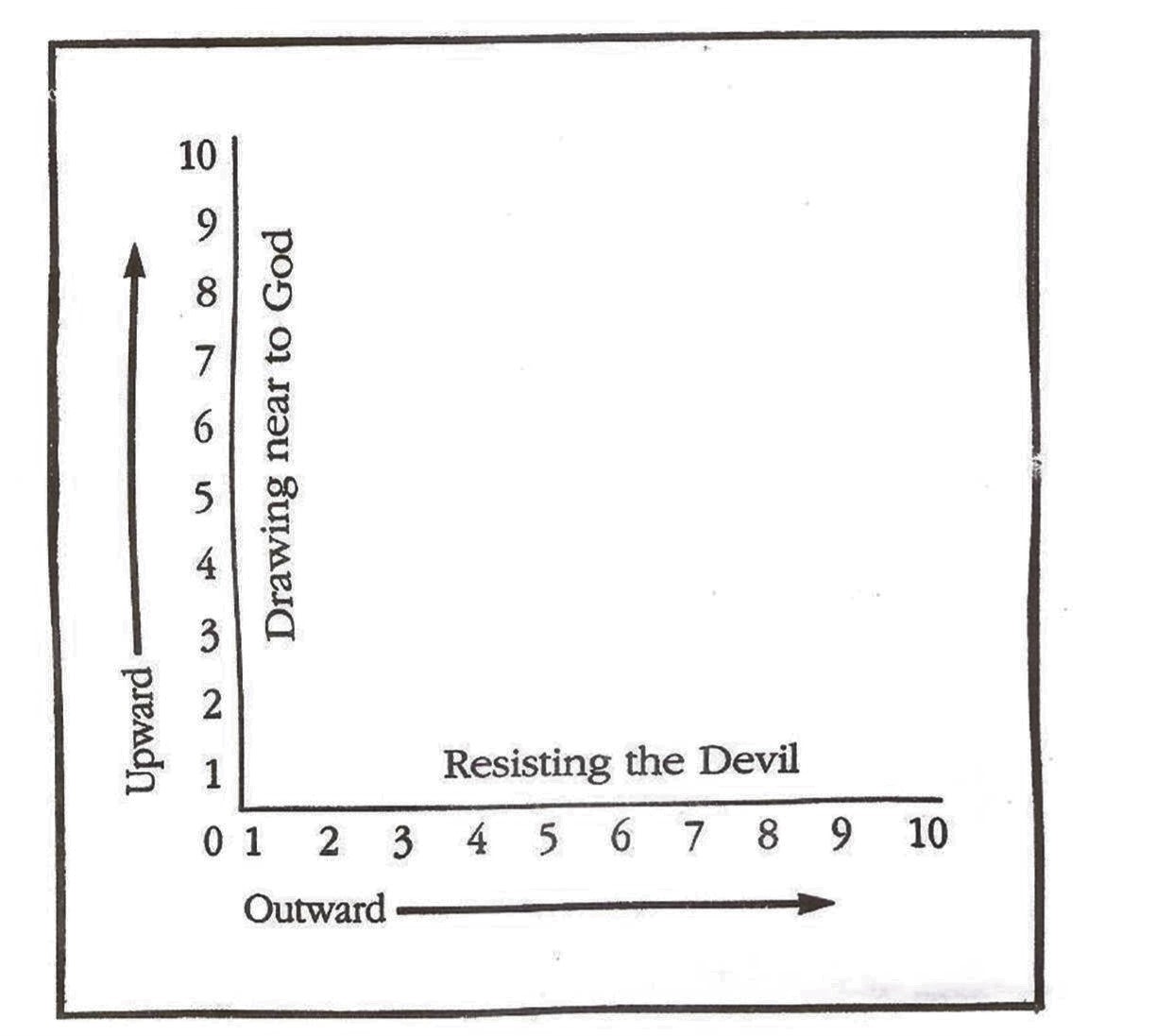 James tells us how

A central text for understanding the relationship for the upward to outward is James 4:7,8:

Therefore submit to God. Resist the devil and he will flee from you. Draw near to God and He will draw near unto you. Cleanse your hands, you sinners; and purify your hearts, you double minded.

In verse 7 “submit to God” is the upward Godward relationship and “resist the devil” is he outward or the Satanward relationship. These verses elaborate on the upward action by setting out three things you must do if you are to successfully resist the devil: (1) submit to God: (2) draw near unto God; and (3) cleanse our hands and purify our hearts. These are the three essentials parts of a spiritual boot camp designed to equip the warriors.

We live in a permissive society where almost everything goes. Many of today’s adult grew up in a dysfunctional family where they never learned what it means to have a loving father, who leads the family, protects and provides for his household, earns the love and respect of his children, and also expects obedience. Not only non-Christians, but even some Christians have a difficult time relating to the commandment “Honour your father and mother” and the biblical admonition, “Children obey your parents in the Lord, for this is right”(Eph. 6:1) Rebellion often seems to be a popular attitude today than loyalty.

Christians who never willingly submitted to a natural father frequently find it difficult to submit to their heavenly Father. They seek God for love, gentleness, forgiveness and healing but draw back from God’s demand for obedience and commitment. They have never fully come to terms with the concept that “Jesus is Lord.” In first-century society when the New Testament was written, there was no doubt in anyone’s mind that a lord was to be obeyed without question. Christians who are not ready to obey unconditionally are no more ready for spiritual warfare than Marines who are not ready to obey their commanding officers.

(1John 2:3). The New Testament does not allow the false separation of loving God on the one hand and submitting to Him as master on the other, which many believers wish today might be true. It clearly says,” For this is the love of God, that we keep his commandments” (1John 5:3).

Submitting to God is the first lesson of the spiritual boot camp.

Drawing near to God is the second lesson. This has to do with our personal prayer life. Prayer in general is a broad subject with many extremely important facets. But none is more important for a Christian who desires to do effective spiritual warfare than personal prayer.

Why is personal prayer more important?

Our personal prayer life is the principal barometer used to measure the quality of relationship to God. I agree with John Wimber when he says, “intimacy with God in prayer is a primary goal of the Christian life” Jesus provides our example. The world knew that Jesus was authentic because Jesus did only what he saw the Father doing (John 5:19). Wimber asks, “Why is our goal intimacy with God?” His perceptive answer is that only in sustaining a close relationship with the Father “do we experience forgiveness, renewal, and power for righteous living. Only in an intimate relationship with God can we hear His voice, know His will, understand His Heart.”

Like it or not, drawing near to God requires time. If we are motivated to pray, the first most important act of self-discipline for implementation is to set aside blocks of clock time. Once you budget the time, a kind of spiritual Parkinson’s Law comes into play and the player tends to expand to fill the time available. Those who do not carve out time, particularly those who rationalize their reluctance to do so by claiming “I pray without ceasing,” usually end up praying very little.

One reason some do not dedicate much time to prayer is that they do not enjoy it. My daughter Ruth hated to wash dishes when she was at home. I was amused to observe through the years that by far the most urgent and critical demand on her time invariably came immediately after we finished dinner. Since she hated to wash dishes, there was always some higher priority demand on her time.

Many Christians have the same attitude toward personal prayer. There always seems to be something more urgent to do. Time for prayer is scare because other activities have higher priority. Some even make the statement that “Prayer is hard work.” I have a difficult time understanding this if the essence of prayer truly is a relationship of intimacy with the Father. It would be like me saying, “Spending time with my wife, Doris, is hard work,” I would never say that for two reasons. First, it is not hard work, it is pure joy. Secondly, if I did say it, she will take it as an insult, and I wouldn’t blame her. Could it be that God might take such an attitude as an insult also?

I plan on writing more about personal prayer in another book in this series on prayer, but because developing strong personal prayer habits is so essential to preparing spiritual warriors for battle, I will briefly mention five principles that help a great deal if you want to enjoy prayer more:

Enjoying prayer is a sure sign that you are receiving good preparation for warfare.

Fasting. From time to time, when Jesus’ disciples ran into trouble trying to cast out a demon, Jesus had to instruct them that certain kinds come only through prayer and fasting (see Matt. 17:21). Just as it is necessary for us to draw near unto God through prayer, it is also necessary for us to draw near through fasting. Learning how to fast is part of spiritual boot camp.

Many who read this will be experienced, practicing fasters. This short section is not for you, but for those who are wondering how to begin. Although there are many different kinds of fasts, the most common, and the one I recommend for starting, is to abstain from food not from drinks, for a given period of time. So far as drink is concerned, all agree that water is basic. Some add coffee or tea, some add fruit juices. All also agree that something like milk shake goes too far, and is not in the spirit of fasting. Whatever, the fast involves an intentional practice of self denial, and this spiritual discipline has been known through the centuries as a means of opening ourselves to God and drawing closer to Him.

I think fasting should be practiced both on regular basis and also on occasionally as needed or as agreed. I myself am just a beginner, so I have decided to discipline myself not to eat anything between Tuesday supper and Wednesday noon. This I have found is not hard to do. The hardest part was to decide to do it. This is my regular fast, and it has taken any reticence about fasting away from me. On this basis, on the occasional, longer fasts are much easier. A while ago, for example, I was invited to a retreat where we were to pray and fast all day long, and because of the habit I had developed I had no problem at all.

Sometimes we don’t encourage other members of the Body of Christ to fast because we recall Jesus’ rebuke to the Pharisees that they sinned by making a public display of fasting (see Matt. 6:16-18). Just because we should fast in secret does not mean, in my opinion, that we should keep fasting in secret or not encourage others to do it by our example. That is why I share my present fasting habits in print here. We need to talk about fasting more and do it more.

To the degree that the fasting becomes more of a norm in our day-to-day Christian life as individuals and congregations, we will become more effective in spiritual warfare.

Drawing near to God through prayer and fasting is the second important lesson of spiritual boot camp.

3. Cleanse Your Hands and Purify Your Hearts.

In the instruction for submitting to God, Jesus says, “cleanse your hands, you sinners, and purify your hearts, you double-minded” (Jas. 4:8). Cleansing the hands refers to what you do, and purifying your hearts is what you think or feel. Put together, it is the call to holiness, and holiness includes both attitude the action.

Developing holiness is essential for a spiritual warrior. Unfortunately, various aspect of holiness have been so blown out of biblical proportion in recent times that holiness has become not a blessing for spiritual warfare as God intends it, but a barrier to effective spiritual warfare. This is an important enough aspect of spiritual boot camp training that I feel it needs considerable attention.